What History Tells Us About Elections and the Markets

While surprises can and do happen, voter surprises in America frequently lead to outcomes that investors and pundits don’t expect.

Election Day here in the U.S. is coming the first Tuesday in November. For those needing a civics refresher, the President is elected every four years. Every two years the full U.S. House of Representatives and one-third of the Senate are up for reelection. While election outcomes may be uncertain, one thing we can count on is that plenty of opinions and prognostications will be floated in the coming days. In financial circles, this almost assuredly will include the November election’s potential for impacting global markets. But should long-term investors be overly anxious about even controversial elections?

We caution those who invest against making short-term changes to sound long-term planning to try to profit or avoid losses from political changes they think may happen. For context, it is helpful to think of financial markets as a powerful information-processing machine. The combined impact of millions of investors placing billions of dollars’ worth of trades each day results in market prices (we usually notice only at the end of a trading day) that incorporate the aggregate expectations of all those investors. The implication in practice is that consistently outguessing market prices is very difficult.1 While surprises can and do happen in elections, trying to predict the consequences of those outcomes even when an investor is correct about who wins most often leads to no significant financial advantage.

The presidential election back in 2016 serves as the most recent example. There were a variety of opinions about how that election would impact markets, but many articles at the time posited that stocks would fall severely if Trump were elected.2 The day following President Trump’s win, however, the S&P 500 Index closed 1.1% higher. So even if an investor would have correctly predicted the election outcome (which was not apparent in pre-election polling), there is no guarantee that they also would have predicted the correct directional move of the market, especially given prevailing disaster narratives.

But what about congressional elections? Again, market strategists, pundits and news outlets will offer many opinions on who will win various districts, what party will take control, and what impact a change of control (if any) will have on financial markets. However, data for the stock market going back to 1926 shows that returns in months when elections took place did not tend to be that different from returns in any other month.

Exhibit 1 shows the frequency of monthly returns (expressed in 1% increments) for the S&P 500 Index from January 1926 – December 2019. Each horizontal dash represents one month, and each vertical bar shows the cumulative number of months for which returns were within a given 1% range (e.g., the tallest bar shows all months where returns were between 1% and 2%). The blue and red horizontal lines represent months during which a midterm election was held, with red meaning Republicans won or maintained majorities in both chambers of Congress, and blue representing the same for Democrats. Striped boxes indicate mixed control, where one party controls the House of Representatives, and the other controls the Senate, while gray boxes represent non-election months.

This graphic illustrates that election month returns were well within the typical range of returns, regardless of which party won the election. Results similarly appeared random when looking at all Congressional elections (midterm and presidential) and for annual returns (both the year of the election and the year after). 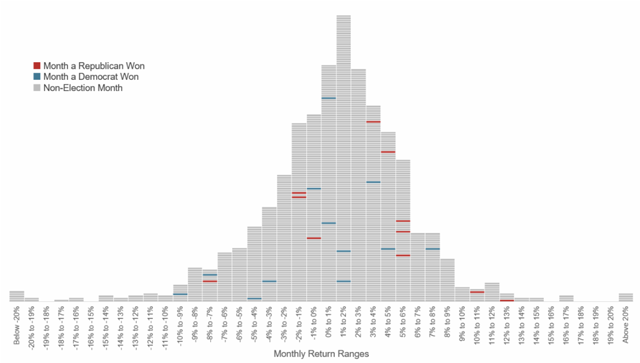 Past performance is not a guarantee of future results. Indices are not available for direct investment; therefore, their performance does not reflect the expenses associated with the management of an actual portfolio. Source: S&P data © 2020 S&P Dow Jones Indices LLC, a division of S&P Global. All rights reserved.

Planning for the Long Term

While month-to-month or even calendar returns can be distracting, what really matters for long-term success is how your wealth grows and eventually provides income over your lifetime planning horizon. Exhibit 2 shows the hypothetical growth of wealth for an investor who put $1 in the S&P 500 Index beginning back in January 1926, shortly before the Great Depression years. Again, Presidential election impact on the largest U.S. stocks during their time in office is laid out. And again, Presidents of both parties have periods of significant growth and significant declines — sometimes both ways during their term of office. However, no persistent pattern of stronger returns occurs when a President of either party is in office, or when there is mixed control in Congress during their terms. Markets have historically provided returns over the long run irrespective of (and perhaps for those who are tired of political ads, even in spite of) which party is in power during a term of office.

Exhibit 2: Markets Have Rewarded Long-Term Investors under Variety of Presidents
Growth of $1 Invested in the S&P 500 Index: January 1926–December 2019 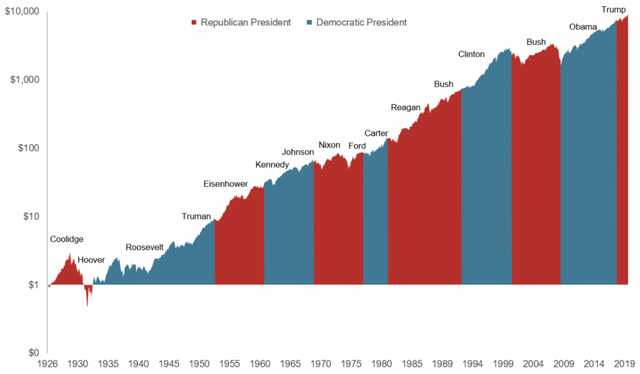 Past performance is not a guarantee of future results. Indices are not available for direct investment; therefore, their performance does not reflect the expenses associated with the management of an actual portfolio. Source: S&P data © 2020 S&P Dow Jones Indices LLC, a division of S&P Global. All rights reserved.

Equity markets can help you substantially increase your wealth relative to fixed income alternatives like bank deposits. We also believe investing strategy should have a long-term perspective. Making tactical investment decisions betting on the outcome of U.S. elections is unlikely to result reliably in excess returns. At best, any positive outcome based on such a technique will likely be due to random luck but creates for an investor the illusion of skill. At worst, it can lead to future costly mistakes that miss major market upswings.

Fundamentally, there is a strong case for relying a disciplined portfolio allocation strategy based on the science of capital markets, rather than to regularly trying to outguess what the market may do in a certain event — and then worry afterward about whether your decision was smart enough to beat the financial market when there are literally thousands of investors with enormous resources much smarter than you.

Highlights: What History Tells Us About Elections and the Market

Investors often wonder whether the market will rise or fall based on who is elected president. In a recent webcast, Dimensional’s Mark Gochnour and Jake DeKinder offered lessons from history. 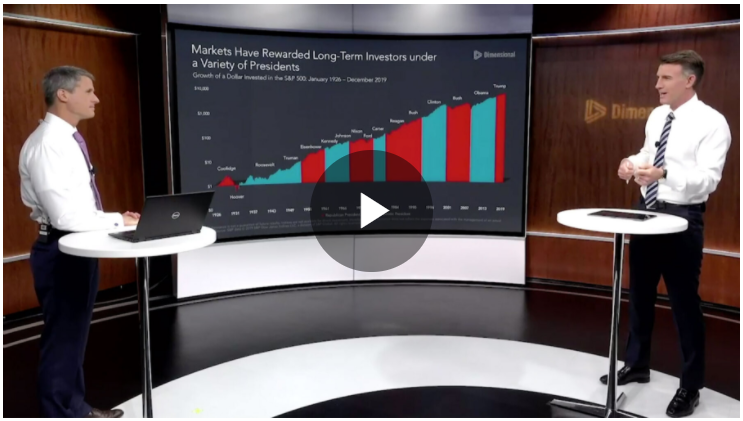 1This is known as the efficient market theory, which postulates that market prices reflect the knowledge and expectations of all investors and that any new development is instantaneously priced into a security.