The year 2019 provided many examples of unpredictable markets.

Interest rates that U.S. policy makers expected to rise, instead fell. American consumers’ confidence weakened as the year began,1 and news headlines broadcast fears of a pending economic slowdown. Market returns of the month of December 2018 were the worst for any December since 1931.

Many fearful investors who temporarily chose to move from stocks into cash and intended to stay there “until things looked better” missed some of the biggest U.S. stock market gains of the year. As of the end of November, the S&P 500 was about 25% for the year on a total-return basis. That puts this year on course for the best showing since 2013.

Outside the U.S., Greece—the site of a recent economic crisis so dire some expected the country to abandon the euro, and whose equity market lost more than a third of its value last year—has had one of the most robust stock market performances among emerging economies in 2019. On top of that, Greece issued bonds at a negative nominal yield, meaning investors actually paid for the privilege of lending to its government.

These events remind us that the game of making predictions can be costly for players.

In the global capital market for U.S. Treasuries — where participants competitively set interest rates — the yield curve that tracks Treasuries inverted for the first time in more than 10 years. See Exhibit 1, below. Some long-term yields fell below short-term yields over last summer. What’s more, while yields on medium- and long-term bonds were at historically low levels early in the year, yet they fell lower. Investors who made moves into cash or short-term bonds betting on rising yields were severely disappointed as events transpired. Bond returns in 2019 turned out to be the best in years. But those who stuck with a sound planning strategy were able to profit.

In equity markets outside the U.S., anticipating events wasn’t any easier. Exhibit 2 shows no evidence that links good performing markets in 2018 and those that excelled in 2019.

Among the 23 developed market countries,2 only one country was a Top 5 performer for both 2018 and 2019: the U.S. Last year’s strongest performing market — Finland — ranked 22nd this year through the end of October.

Among emerging markets, Greece swung from a 37% decline last year to more than a 37% advance for the 2019. 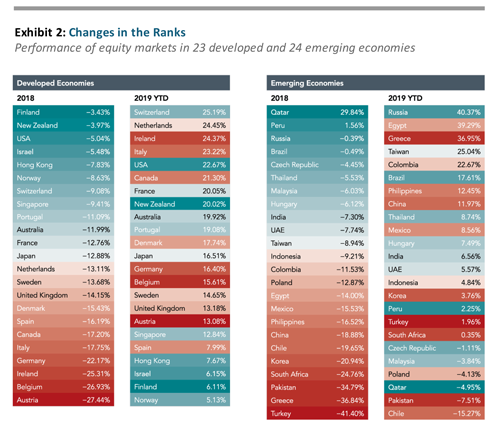 There is no compelling or dependable way to forecast stock and bond movements from historical returns, and 2019 was a case in point. Neither the mainstream prognostications nor media commentators predicted the strong market performances during 2019.

The market’s pricing power works against even those many professional investors who try to outperform through stock picking or market timing. Most will fail. Among mutual funds, for instance, only 18% of U.S. equity mutual funds and 15% of fixed income funds have both survived and outperformed their benchmarks over the past 15 years.3

We believe rather than making investment decisions based on predicting the direction of financial markets, a wiser strategy for successful planning is to hold an allocation of asset classes that focus on systematic and robust drivers of potential returns — structured from great ideas in finance grounded in economic theory and leading academic research.

History shows that capital markets have rewarded long-term investors. Investors broadly diversified across asset classes from around the globe were better positioned to enjoy returns that the markets delivered in 2019. This is true not only this year, but was last year and will be next year. Professional investment management grounded on modern financial science is a timeless approach.

Building wealth for successful retirement is more than successful investing. Tax and asset protection planning are also important. Find a competent CFP wealth planning professional to help you look ahead to retirement with confidence.

1Based on readings from the Conference Board Consumer Confidence Survey and the University of Michigan Index of Consumer Sentiment.

2Markets designated as developed or emerging by MSCI.